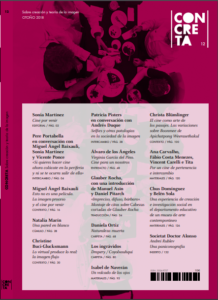 The new issue of Concreta, the research journal about image, dedicated to the project Cine por venir (“Cinema to come”), includes an article about Laav_: An experience of creation and social research in the educational department of a contemporary art museum. An image of the latest production of La Rara troupe, La humana perfecta, illustrates the cover. The presentation of the journal takes place on Thursday November 29 at the Filmoteca of Valencia, with Pere Portabella, Nuria Enguita Mayo (Concreta), Sonia Martínez (Cine por venir) and Sofía Asencio (Sociedad Doctor Alonso).

We publish two new texts around Puta mina (Damned mine): The voices of the mine. Regarding the process in creating Puta mina (Damned Mine), by Chus Domínguez, and La palabra frente a la oscuridad, un prólogo para Puta Mina, by Daniel Bernabé

LAAV_ 18 Meeting. Museums and University. Researching in an hibrid area.

November 23 – 24, 2018.
Meetings to think about the possible relationships between the University and the Museum, with the intention of imagining a common space, open to experimentation and citizen participation.
Access to the program and the documentation of the meetings. 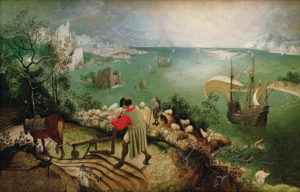 On Tuesday 8 May, we participate in Encuentros Sociología Ordinaria (Medialab-Prado, Madrid) with “Comunidades, audiovisual e investigación experimental; una experiencia de antropología y arte” (Communities, audiovisual and experimental research; an anthropological experience and art”. The slogan of the meetings this year is “We do it and we shall see”, an emotional tribute to the essence of Sociología Ordinaria, with the objective of breaking the academic walls, including other voices and experiences. 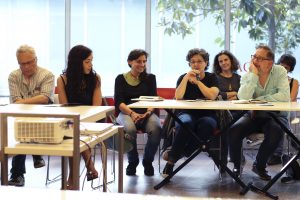 We collect several reflections from the Laav_17 Meetings held last October as Creation / Research / Groups. Art as a critical practice with communities. Speakers María Acaso and Mafe Moscoso, and participants, Diego Pérez and Sara Potxemutxa, build a first-person-polyhedral story which takes us to the development of the meetings experience. Montse Romaní, who could not attend the meetings due to health issues, contextualizes two examples of collaborative cinema that we programmed.

October 6 and 7, 2017.
In these meetings we focus on the three axes in which the laboratory is based on: research, creation and communities. How to combine them from an experimental and critical practice?
Access to the program and the documentation of the meetings. 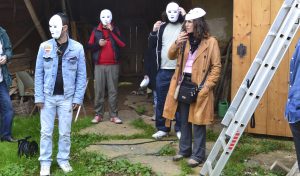 Text about La Rara Troupe from  researcher and curator Alfredo Aracil, who accompanied us at LAAV_16 Meetings and curated the exhibition project Apuntes para una psiquiatría destructiva in sala Arte Joven in Madrid.

“We might say that the images and sounds produced by La Rara Troupe in their videos and sonic work are aimed at producing their own images that, displaced from the puerile sentimentality that usually confirms the image of that other that society calls excluded, create their own territory, a house in which to be recognised. This is not so much the certainty of what should be done as the question of how we do so”.