The profound ambiguity of emotions, halfway between biology and psychology, the individual and society, the body and mind, might suggest that, in addition to a fundamental concern for anthropology, they have represented a real challenge for theoretical construction in the human sciences.
Nothing is further from the truth.

The funeral lament: an “anthropological” phenomenon

What do these three images have in common? 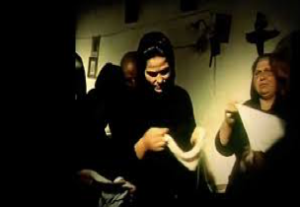 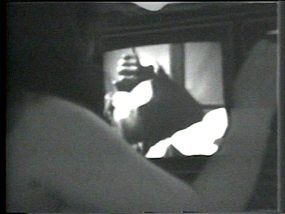 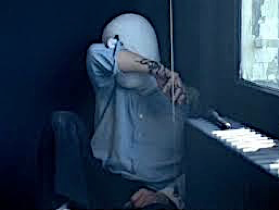 The first is a still from the documentary Stendali. Suonano ancora (1960) by Cecilia Mangini, who reconstructs for the camera the phenomenon of the funeral lament documented by the Italian anthropologist Ernesto de Martino. The second belongs to the video performance My Father (1975), by Shigeko Kubota, where the artist mourns her father’s death in front of images of their final meeting projected on the TV. The last presents Alain Cavalier in Ce répondeur ne prends pas de messages (This answering machine does not receive messages, 1979), a documentary that ends with the process of the director’s confinement in his home, which he paints black while bandaging his head as if he were the Invisible Man.

The three films present intimacy in a ritualised way during processes of mourning, but only Stendali is deemed “anthropological”, having been included in the corpus of films resulting from Ernesto de Martino’s studies of rituals that were on the point of extinction in the Southern Italy of the 1960s. However, from the methodological point of view, the documentary does not conform to the classical canons of audiovisual anthropology that saw cinema as a tool for observation, description and analysis of reality. Mangini reconstructs the rite for the camera, taking inspiration from de Martino’s methodology that states that induction revives it as if it were real. She pervades the film with a tragic meaning through a voice-over written by Pasolini and recited by the actress Lilia Brignone on the loss of a child, spotlighting the protagonists by illuminating and planning the images as if they were costumbrist paintings, enhancing their expressiveness through a rhythmic montage.

Mangini portrays from an artistic perspective the transfer from the individual experience of pain to the public sphere from the practice of the ritual, which is defined by the anthropologist Bruce Kapferer as a set of specific events that are culturally recognised and spatially and temporally separated from the routine of daily life.

The ritual of the funeral lament, still remembered in Italy in the 60s, was a specific technique of mourning the loss of a loved one in community, a mode of behaviour that culture had created and tradition preserved. Its purpose was to overcome what de Martino called “the crisis of presence”, defined as “the risk of not being in the world”, which included phenomena such as psychological dissociation, alienation and loss of the ability to act. The overcoming of this constituted for the anthropologist one of the principal functions of culture.

In our society, institutions such as State or Church are at present charged with ritualising death, while the management of suffering is relegated to psychological practice. However, both Kubota and Cavalier developed practices for overcoming grief with their works that, while responding to each artist’s individual impulse, contain elements that could be related to the ritual of the funeral lament.

Film practice as a ritual

The staging of Shigeko Kubota’s crying like a lamenting woman replaces her father’s corpse with images she shot of him during her final trip to Tokyo, while they were watching television together. The word “image” thus recovers the connection to death of its etymology, imago, the wax mask in the form of a portrait that recalled those who died in the Forum Romanum. This demonstrates that images are memories of an absence, just like obituaries and dedications on tombstones, in resonance with the piece’s sub-headings. 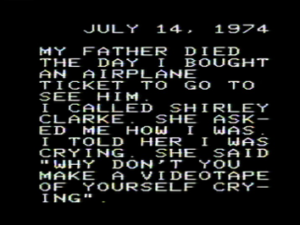 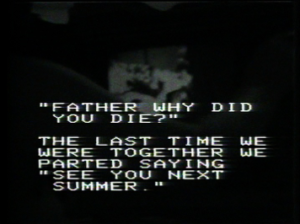 Cavalier does not express with certainty the purpose of his actions, because as he himself would say, at the time he was only thinking about “saving his life through cinema, instead of being clear”. The allusions to a road death, while including numerous photographs by Irène Tunc, suggest the traumatic loss in 1972 of Cavalier’s wife, whom he recalled more explicitly in the documentary Irène (2009). The choice of black and the use of fire as a purifying element, symbolic elements that pertain to the cultural sphere of mourning in Europe, together with the director’s wish to disappear as he hides in his apartment wrapped in bandages, could be connected to the phenomenon of the crisis of presence described above. 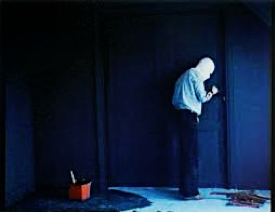 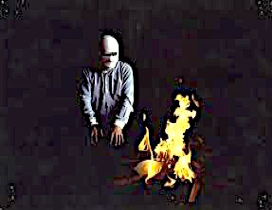 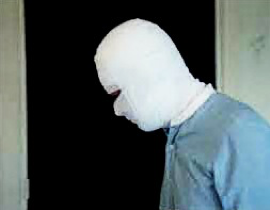 Both films are presented as ritualised devices constructed by artists. Kubota’s accompanies the lament of the video performer while recalling her father; Cavalier’s allows him to externalise (or exorcise) the inner darkness generated by his loss. As in the funeral lament, the artists’ actions contain a will to share pain with a community that we could term “the filmic community”. The camera is the first witness that enables them to be seen, existing for someone beyond themselves, a possible antidote against the risk of disappearance. The camera works, as Jean Rouch noted, as a device that catalyses realities, rather than as the neutral and invisible witness observing reality without bias that anthropology wishes for.

The transfer of personal suffering to the community through the rite was a practice that was frequently observed in peasant societies, whose collectivist nature helped individuals feel that they belonged to the community. If the relationship between the intimate, the private and the public establishes a personal territory with variable borders that delimit, according to the person or social group, what can be shared or not with the rest of the community or society, both individualism and collectivism refer to a tendency to act, on the basis of a personal autonomy that is inscribed in social norms and culture.

Audiovisual anthropology in a liminal state.

In individualistic societies, this transfer from the traumatic experience experienced in intimacy to the filmic expression that implies its communication to “others” who are not therapists, confessors, or pedagogues, with whom this type of experience has been shared, has led to narcissistic features being perceived.

Both anthropological practice and its audiovisual component have publicised aspects of the intimacy and privacy of those they studied under the precept of cultural pattern. However, for a long time they refused to accept self-referentiality and subjectivity in their discourses, like documentaries, which is traditionally assigned to the historical world. For its part, video art was constructed from its origins on the basis of direct communication between artists and the public, linked to the inscribing of the bodies of performers and in many cases to the direct expression of intimacy. For this reason, Rosalinde Krauss stated in the 70s that video was the narcissistic device par excellence, with its ease of use and instant reproduction being perfect for work of a confessional nature.

However, audiovisual creation of a self-referential type associated with traumatic experiences would not normally start from an individual’s complacency that is reflective of narcissism, but from the sensation of a lack or an imbalance of something that calls for redress in one way or another. In the south of Italy, before the advent of modernity, communities had preserved their rituals to alleviate suffering. At present, artists who through the expression of their own experience are the ones who enable, should identification occur, the feeling of communion with similar others.

With regard to the self-referential documentary, Alisa Lebow indicates that the “self” is never conceived in an isolated form. It implies a problem of relation, since each autobiography engages knowledge, memory, history and identity, entities that are much larger than the self. Self-referential audiovisual forms mainly imply the expression of the emotional world, situated on the border between the interior and the exterior, the self and the us, the psychological and the anthropological, the cultural and the social. Emotions felt, perceived and expressed by individuals form part of cultural repertoires that allow us to recognise each other and to recognise ourselves.

Rituals, like art, have enabled human beings to take the liminal states described by Arnold Van Gennep, in which the condition of people is ambiguous, hybrid, intermediate, to halfway to nowhere, where presence and identity are at risk. These three films or audiovisual pieces affirm the phenomenon of liminality in the face of loss by offering different cultural responses in each case.

Liminality could also be applied metaphorically to audiovisual anthropology, a discipline that has never become consolidated or defined, being located on the border, in an eternal search for identity. In this unstable transfer that has enabled it to be hybridised with art, we find its maximum interest and potential.

Noemí García Díaz is Audiovisual Professor at the Faculty of Fine Arts of the Complutense University of Madrid. She studied Audiovisual Communication, Social and Cultural Anthropology and Psychology. She coordinates the research, creation and exhibition project Una Casa, created with the aim of exploring the relationships between art, anthropology and psychology.